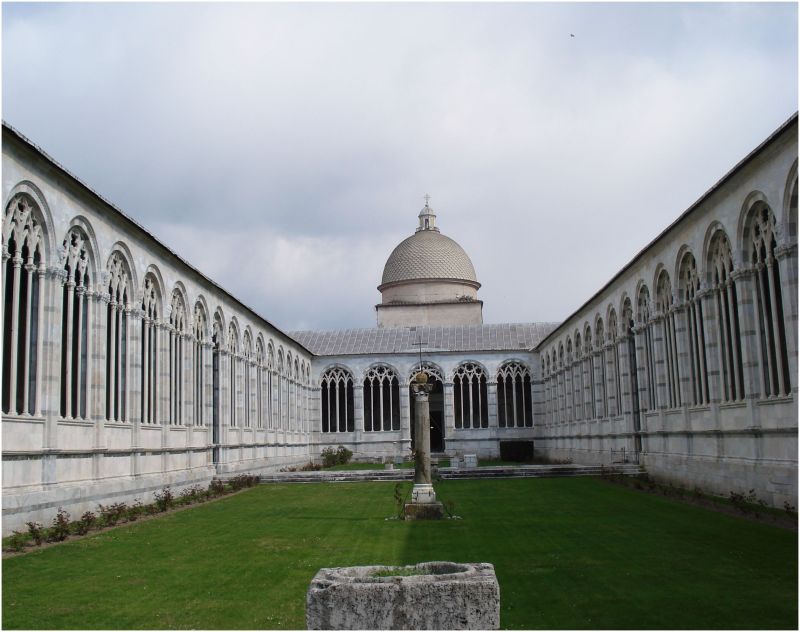 The Campo Santo monumentale ("monumental cemetery") lies at the northern edge of the Square. It is a walled cemetery, which many claim is the most beautiful cemetery in the world. It is said to have been built around a shipload of sacred soil from Golgotha, brought back to Pisa from the Fourth Crusade by Ubaldo de' Lanfranchi, archbishop of Pisa in the 12th century.

The building itself dates from a century later and was erected over the earlier burial ground. The building of this huge, oblong Gothic cloister began in 1278 by the architect Giovanni di Simone. He died in 1284 when Pisa suffered a defeat in a naval battle of Meloria against the Genoans. The cemetery was only completed in 1464. The outer wall is composed of 43 blind arches. There are two doorways. The one on the right is crowned by a gracious Gothic tabernacle. It contains the Virgin Mary with Child, surrounded by four saints. It is the work from the second half of the 14th century by a follower of Giovanni Pisano. Most of the tombs are under the arcades, although a few are on the central lawn. The inner court is surrounded by elaborate round arches with slender mullions and plurilobed tracery.

It contained a huge collection of Roman sculptures and sarcophagi, but now there are only 84 left. The walls were once covered in frescoes, the first were applied in 1360, the last about three centuries later. The Stories of the Old Testament by Benozzo Gozzoli (15th century) were situated in the north gallery, while the south arcade was famous for the Stories of the Genesis by Piero di Puccio (end 15th century). The most remarkable fresco is the realistic The Triumph of Death, the work of Buonamico Buffalmacco. But on 27 July 1944 incendiary bombs dropped by Allied aircraft set the roof on fire and covered them in molten lead, all but destroying them. Since 1945 restoration works have been going on and now the Campo Santo has been brought back to its original state.